We had a great time at the Gibby's cabin last weekend.
Nathan got to take his first 4 wheeler ride and loved running around with his cousins,
except when he was glued to my hip.
I am glad Curtis was on this vacation to help out with my shy, clingy boy (he's only shy in unfamiliar, noisy places). 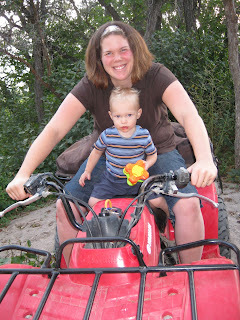 Shauna and John have been working really hard to expand the back patio, just about everyone chipped in. Matthew, my brother-in-law even tackled a rock that was rolling down the hill.
I told him it wasn't a pig. =)
I didn't know there were so many songs about rocks!
I think the family sang them all as they built the retaining wall. 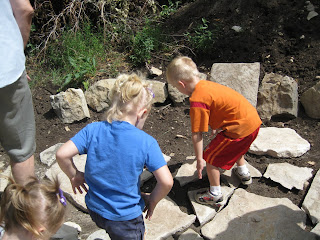 Elise and Scott announced that they are expecting a baby, their first (thus the side bar addition).
I tried to introduce the family to some fresh veggies,
but I think they are afraid of the color green.
I got a lot more odd looks than yeses when I asked if anyone wanted to try whatever I was eating. Those that tried my raw chocolate coconut balls liked them.

way to get in your raw stuff...chocolate coconut balls..ha ha