There's a Mouse in the House!

As I was getting Nathan out of the car a couple of days ago, Audrey went inside without me and quickly returned yelling, "There's a mouse in the house!"
"Is it dead?" I asked. "No" "Is it running around?" "No" "Is it moving?" "Yes"
I was little confused so I followed her in and there it was sitting in front of the refrigerator. It looked like it was eating, but it did not run away, so I grabbed the camera. That's when I realized it probably found the poison and hadn't quite died yet. I put on some gloves and through it outside. 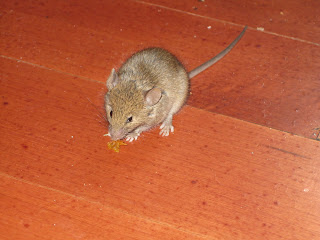 Every time I lay down for a rest during the day I hear the mice scratching above me and I have not been able to relax, let alone sleep. Curtis put poison in the attic, but I guess they haven't found it yet. There are some downsides of having woods and fields instead of neighbors behind our house. Any suggestions for getting rid of them once and for all? They avoid the traps and most of the time avoid the poison.
Posted by Sarah Gibby at 3:33 PM 2 comments:

I am so proud of my hubby! He was offered a job Tuesday night and started working there the very next day. A client he worked with at RMP thought of Curtis when his company decided to start a new project, called him and asked if he was interested in a new job. Not long after the interview, he was offered the job at a fairly good raise and cheaper insurance. This shows what a good, dedicated worker Curtis is, that someone would seek him out. How awesome is that.

I am aware that though we are getting a raise, it will be the next two weeks that will be the tightest for us because this is when we are being paid from RMP at the reduced pay amount, but there is a light at the end of the tunnel. I think the Lord knows that I am a wimp and can't handle too much stress for too long.

Earlier today, another company contacted Curtis about a different position with an even bigger raise. I'm not sure about the ethics of jumping from one job to another in less than a week and it is up in Salt Lake, but the price range they are offering is significant enough to possibly say OK. This offer is also unsolicited, just good word of mouth from E-Harbor because of Curtis's work ethics. We'll see how things turn out. Pretty crazy.
Posted by Sarah Gibby at 3:15 PM No comments:

There have been lots of things happening around here, big changes, that I thought I would document and share.
The good news is that we are expecting baby number three! We are all very excited about it and can't wait until September 10th. We get to go listen to the heart beat for the first time next week. I have not been nearly as tired as I was with Nathan, but I have slowed down a little bit. I like to take a 10 minute rest in the afternoon most days, if time allows. I have been a lot more nauseous this time and I have had an aversion to vegetables. It has been a real challenge to eat healthy. I really need to get back on the bandwagon.
Last Thursday all the employees at Curtis's work were called into two different rooms, one room was told to pack up their stuff and were handed a check for their work up to that day. The other room got to stay. Curtis was one of the 60% who left without a job. What a crazy, unexpected surprise. He immediately drove over to RMP, his old job that he still worked a couple hours a day for, and continued to work. They have continued to allow him to work full time for now. They are in the middle of a buy out and no one knows the future, but we are so blessed that we still have something and that Curtis is so dedicated and hard working. He even already had one job interview. We are really hoping it works out because it is right here in American Fork.
In an effort to really tighten our belts, I have switch to cloth: diapers, napkins and wipes. For the napkins and wipes I just serged some scraps of flannel I already had. I really don't know how to tighten up any more. I still bought things that I didn't need to this week, maybe that's why I'm a little down right now, I feel like I'm failing. Why can't I just spend nothing except for necessary food items? Sigh. I'm cheap, but I still buy things I know we don't need.
We did nothing special for Valentine's Day, on purpose to avoid spending, but it made me feel a little sad, like other husbands and wives treasure each other more than we do. I got a skirt on clearance with a coupon for my V-day gift, very cute for $5 and tonight I am making Curtis some peanut butter rice crispy treats at his request.
Posted by Sarah Gibby at 4:32 PM 2 comments:

A few months back Curtis and I were discussing how spending affects the economy and we had fun thinking about what the world would be like if everyone spent their money like we did. Since Curtis got laid off and went back to his old job with a large pay decrease, we spend even less, but here is a run down of the things we came up with. I found it quite entertaining.

There would only be $1 movie theaters. The normal priced ones would just not exist.

All clothes would go straight to the 80% off clearance racks. No one would ever look anywhere else.

Wal-Mart would be doing just fine, whether that is good or not, they are cheap and convenient. But the processed food section would be like 20-30% instead of 80% and they would stock mostly store brand items.

There would not be very many restaurants and the ones that would stay open are the ones that have buy 1 get 1 free entree coupons. Everyone would look forward to the once a month treat with coupon in hand.

The fast food restaurants would only have a $1 menu and again there would not be very many. Going once every couple months at a buck a meal wouldn't keep them going for long.

Costco would have half as many members because everyone would just go with their mom.

Airlines would only have coach class.

Spa or tanning places...what are those?

All dentists would have free cleaning and x-ray coupons and be seen once a year if lucky.

Robert's Crafts and Jo-Ann's would do fine, but they would just keep the whole store at 40-50% off so that we wouldn't have to worry about remembering our coupon, or having our 2 year old buy the second item for us with an additional coupon.

The dollar store would do okay. Most of their business would be done just before Christmas or Easter.

That would be a pretty crazy world. I think it would feel empty and boring. But I don't feel we are empty or boring, well maybe a little boring. We have so much and I usually figure out a way to get something I want if we can't afford it, in no way to I feel deprived. This is how I was raised and it's a good thing I was or we'd be in a real pickle right now.
Posted by Sarah Gibby at 10:07 AM 4 comments: